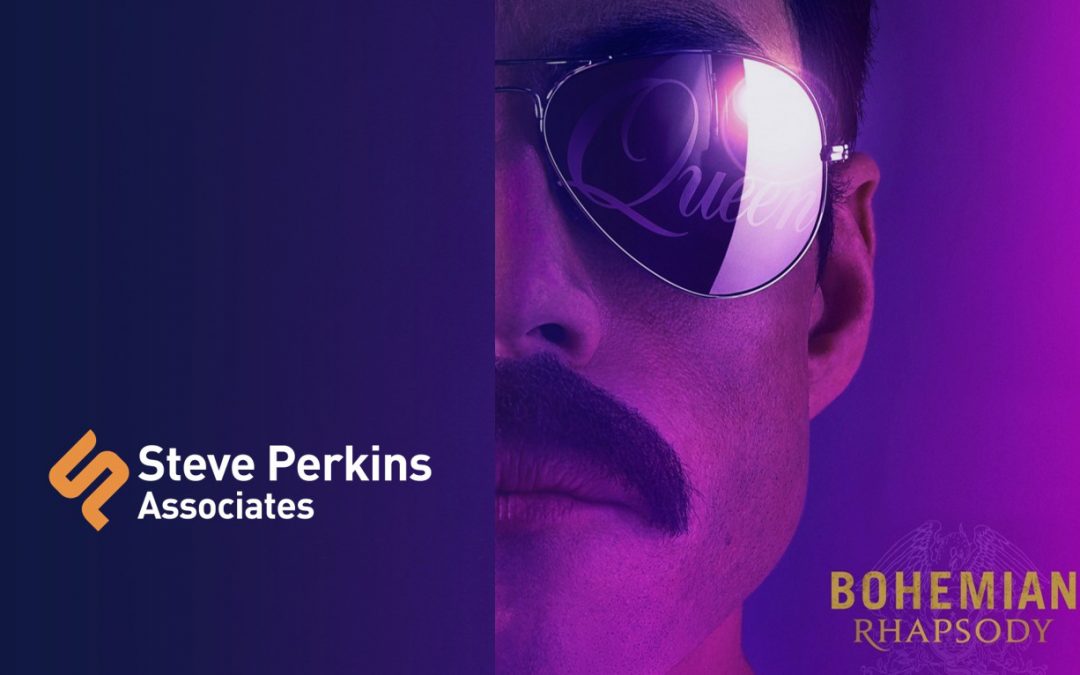 Released in 2018, Bohemian Rhapsody is one of those films that’s been maligned by critics, but loved by audiences worldwide. Rami Malek shines as the mercurial Freddie, with all his creativity, confidence and contradictions. For someone from the ‘Live Aid’ generation the finale scene at Wembley is a foot-tapping, sing-a-long, adrenaline-pumping riot!

So what made Queen, and Freddie in particular, so successful? I’m no rock musicologist, but one thing that stands out in the film’s retelling of the story is their hunger to innovate; they were desperate to find a distinctive ‘sound’ to set them apart from every other 70’s rock band.

The film devotes a number of scenes to the story behind the iconic song from which it takes it’s name; the meeting with a record label boss to introduce him to Mercury’s operatic influences; pitching the idea of a six minute single; and crazy studio sound experiments and multi-track voice recordings. The rest, as they say, is history as Bohemian Rhapsody went on to become one of the most famous and well-loved rock anthems of all time.

Every organisation with aspirations to grow knows it needs to innovate. In our fast-paced world innovation is mission critical. But, innovation doesn’t arise just from ‘business as usual’. An innovative culture has to be cultivated.

In the early 1900’s Henry Ford focused all his efforts on one goal; reducing production costs to create a car for the masses. By 1908 he had realized that vision with the introduction of the Model T. Demand grew so high that by 1921 the company was producing 56% of all passenger cars in the United States. But in the late 1920’s, as the U.S. economy rose to new heights, consumers started wanting greater variety in their cars. While Ford remained fixated on improving the Model T, competitors such as General Motors started producing an array of models and soon captured the main share of the market. Owing to its single-minded focus on efficiency, Ford stopped experimenting and innovating and fell behind.

Genuinely new insights often happen unexpectedly. Call them random, serendipitous or providential, but rarely can they be predicted. No one commits to delivering five new innovations in their annual business plan!

So what can we do to increase the likelihood of innovation in our organisations? There are two key areas to focus on, and the implications of both can be uncomfortable for leaders.

“Nearly every great discovery in science has come as the result of providing a new question rather than a new answer”, said Zoologist, Paul Meglitsch.

In a culture of innovation there’s no such thing as ‘a dumb question’. If Queen had not been willing to question the accepted norm of the 70’s record business that every successful single was three minutes long, then Bohemian Rhapsody would never have been written.

As one of four brothers I was fortunate to have an amazing mum who happened to be a school-teacher. I distinctly recall in our pre-school years that she didn’t try to cram our minds us with lots of knowledge in an effort to give us an educational boost. Instead she taught us to ask questions about the world and took time to listen and respond to us. In short, she modelled question asking and inquisitiveness and that left me with a legacy of innate curiosity about the world and people, which has driven my quest for innovation and improvement ever since.

When you ask questions, particularly of other people (not Google!) you stimulate them to think for themselves. In my field of health and safety this is particularly important when our goal is to get people thinking about risks for themselves not simply obeying rules when the boss is watching.

Frans Johannsen, author of ‘The Medici Effect’ (Harvard Business School Press, 2004) argues that the most powerful innovation happens at the ‘intersection’, where ideas and concepts from diverse industries, cultures, and disciplines collide. He asserts that innovation today is less about expertise and more about how you can rapidly combine insights and ideas, often widely disparate, to create surprising and unique breakthroughs. For ‘intersection’ to even be a possibility we have to expose ourselves to other diverse streams of thought and not just ‘plough our own furrow’ more deeply.

I’m yet to meet a seasoned successful leader whose career followed their first plan or expectation. So many seem to have taken a winding path through a variety of experiences rather than an ‘as the crow flies’ route to their current destination. At times I’ve been confused by my own journey, wondering how my various roles as scientist, manager, church leader and CEO fit together. And yet now I find the three strands of business, people and science woven together perfectly to support my executive coaching and consulting in the EHS world, with insights and experiences I would not otherwise have.

Of course diversity doesn’t always make us comfortable, but having our preconceptions and thinking challenged and being forced to understand the different approaches others take is a price worth paying for creativity. When Freddie Mercury first introduced his fellow band members to his interest in operatic arias there were puzzled looks and serious doubts. But as they explored and experimented, an innovative sound was born at the intersection of rock and classical music. Surely that justified their claim that, “We are the Champions”, at least in the field of popular music!