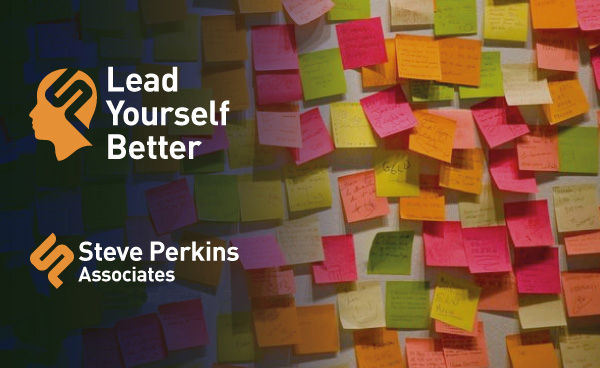 When serious stress strikes one of the most debilitating effects is often uncontrollable worry; that constant spiralling of your thoughts that seems to go round and round and down and down, but leads nowhere. It can feel like you’re mind is on roller-coaster over which you have no control. Like Bill Murray in the 1993 US comedy Groundhog Day, you feel destined to relive the same problems over and over.

But, hang on a minute. Is worry really ‘uncontrollable’? Is it something that descends upon our minds, over which we are completely powerless? Or can it be controlled?

Well, the fact it keeps you awake at night and consumes your thought life would seem to indicate that. You’ve tried distraction; a novel, a film, a night out – enjoyable while they last, but then reality kicks in and the worries return. Maybe you’re ready to admit it – “I actually do believe my worrying is uncontrollable”.

And that’s where the humble Post-It comes in. This little sticky note can help you challenge and defeat that internalised belief that there’s nothing you can do about worrying. And once you realise that for yourself, you’ve found the chink in the armour of worry.

So how does it work? Before I explain let me say I write about this, not as a clinical professional, but as a user of CBT. I don’t know that CBT works for everybody, but I have found it hugely helpful. Like most CBT exercises it’s not a quick fix and you have to do your homework methodically and consistently. You also have to swallow your pride and “follow the programme”, even if it seems a bit daft at first!

The first step is to take a pack of Post-Its and a pen and keep them on you throughout your day. Then every time a worrying though enters you mind write it down on a Post-It. Write two or three words (no essays!) Enough to remind you what the thought was when you come back to it later. Then say to yourself “I’m not going to think about that now. Instead I’m postponing worrying about it until my Thinking Time later this evening”. Postponement is the key word here. Keep repeating this every time a worrying thought occurs throughout your day. If it’s the same one popping up again just place a tick by the note you’ve already made to indicate the recurrence. In fact you should expect repeats – that’s entirely normal.

Now, you have already determined to set aside 40 minutes that evening, after work and anything else you need to do, for your Thinking Time. When you get to it, find a quiet place where you won’t be disturbed, take your Post-Its with you and shut the door. And then for 40 minutes worry about all the thoughts you’ve written down as much as you can. Yes, you heard me right – go to town on your worries! Give it the full 40 minutes and then stop and go and do something that will lift your mood.

It sounds crazy right? But you need to repeat this daily for at least a week in the first instance and take very careful note of what happens in your thinking. Effectively, this exercise is a controlled experiment to prove to yourself whether it is possible to postpone your worries. Over time you will probably discover three things during your Thinking Time as I did:

Over the course of a week or two you begin to train yourself in the art of postponement. As the worries come, you record, postpone and move on. You know you will be spending time thinking them all through later and bit by bit they intrusion on your day reduces. You begin to realise that if you can actually postpone thinking about a worry then it can’t be uncontrollable. Now the armour of that belief about worry that was buried in your thinking doesn’t just have a chink in it, its falling apart!

Like I said, it takes time and you have to be diligent. That’s not surprising really when you think how long your worry habits have been building up over the years! No one likes to admit to worry, particularly if you lead or manage others (ironically even that thought itself is a worry – “I’ll look weak”). But the truth is, worry is part of the human condition and no one is immune.

There’s a lot more to the postpone technique and the Thinking Time concept, but I hope this has given you a taste of the Power of the Post-It in helping you overcome worry. Whatever your mind tells you, it is not uncontrollable. Of course, me telling you that isn’t good enough, you have to prove it to yourself. So…. where are those Post-Its?