Significant improvement of dust exposure control during asphalt planing on the M25.

Healthier Highways is the collaborative initiative to improve health protection across the M25 supply chain led by Steve Perkins Associates on behalf of Connect Plus, the 30 year DBFO contract holder for the renewal, maintenance and operation of the M25.

As part of this initiative Steve Perkins Associates, working together with connect Plus Services, Tarmac and Skanska, their planing contractors and a planer manufacturer, has made a great step forward in controlling dust exposure on asphalt planing operations. This will result in significantly improved health protection for all those working on planing operations.

We suspected that dust levels were likely to be high during surfacing works. During December 2019, exposure assessments were carried out by one of our Chartered occupational hygienists on a number of M25 sites. It was found that asphalt planing activities gave rise to significant personal dust exposures for planer crews.

Although silica dust levels were relatively low, respirable and inhalable dust levels were found to be at or near the advisory limits. It was concluded that there was a need to formalise existing control measures, as well as take further steps to reduce dust exposures.

Discussions at the supply chain working group, formed by all the partners, indicated that there could be perceptions in the industry that led operators to manually minimise water usage during planing.

Water is applied via a spray system on the planer to cool the rotating drum cutting tools and to damp down dust as it is extracted from the drum housing by the vacuum extraction system and deposited onto the conveyor belt.

Further static exposure dust assessments were undertaken by Steve Perkins Associates at a number of M25 sites during August and September 2020, to objectively assess the impact that water suppression and extraction fan condition have on the generation of dust during planing.

We found that dust levels were significantly reduced when the controls are operated as per the manufacturer’s instructions (i.e. with 100% water spray volume on both the drum and belts of the planer and a properly maintained and clear fan). Dust levels were found to more than double when water was removed from the belts or when overall waterflow was reduced. This difference in dust levels could even be observed visually between the unrestricted water case (image A) and the restricted water case (image B).

Following further discussions and investigations by the working group we concluded that the reasons behind the perception of the need to minimise water usage during planing were not applicable to M25 works, where the planing time window is relatively short. So we have been able to more than halve dust levels through the proper use of existing engineering controls, resulting in a much safer working environment at little or no additional cost to the job. 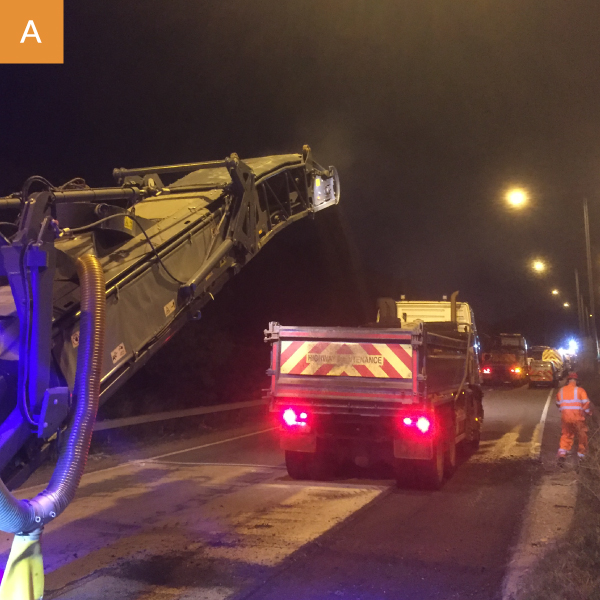 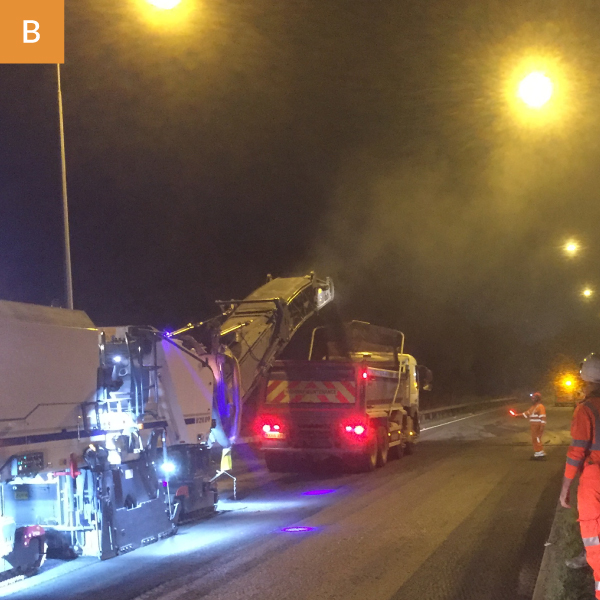 It has been agreed that all M25 planing works will now be carried out with contractors ensuring that water flow and extraction fan speeds are operated in accordance with the manufacturer’s recommendations. This means water will be supplied to all belts as well as the cutting head at 100% and that the fan will be set at 100% extraction. Contractors will also ensure that they have adequate checks, maintenance, thorough examinations and tests in place for the extraction fans to satisfy the requirements of the COSHH regulations.

Connect Plus/Connect Plus Services are considering introducing checks on the use of water for planing to ensure that it is carried out in accordance with the manufacturer’s recommendations.

Tarmac and Skanska are looking to ensure checks are made with their planing crews and contractors on water spray usage and fan maintenance. Wirtgen are considering the guidance they can provide for planer operators in the UK to ensure the Local Exhaust Ventilation (LEV) system of the planer fan and ducting is adequately maintained and tested to satisfy the requirements of the COSHH regulations

The Supply Chain Working Group led by Steve Perkins Associates has been a great example of how cooperative working can achieve a positive health change for our workforce.

These finding are being communicated to Highways England and more widely across the highways sector, via the Highways Safety Hub and the Supply Chain Safety Leadership Group, to ensure the health benefits of improved dust control can be made available to the wider workforce on the Strategic Road Network.

“Raising awareness of the dangers of airborne pollutants and actively educating our operatives who work with or in close proximity to surfacing works is a step change in risk management for each person’s individual health.”

“It's been really great to be able to work in a scientific way to prove that old misconceptions about doing the 'right thing' could potentially be harmful to workers health.”

“It’s been great to work alongside both our customers and their supply chain, to raise the awareness and knowledge levels of operatives about the potential hazards. By using technology built into the machines in the correct manner operatives can take a positive step to improving the health of themselves and those around them.”

“The collaborative approach to protecting the health of our employees as well as the health of our supply chain partners has been refreshing. On-site monitoring and sharing of results has enabled us to clearly demonstrate to the people operating the machines, that following manufacturers recommendations is vital to maintaining a healthy working environment for everyone on site.”

“As a member of the supply chain, and a major stakeholder in the study, it has been a refreshing, collaborative approach to identify the potential issue and take steps together to improve the work environment and ultimately the health, safety and wellbeing of our people.”